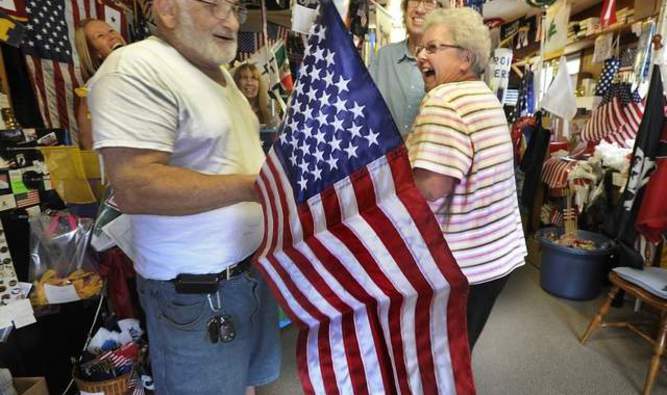 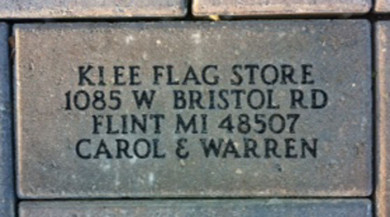 Watch Annin Flagmakers on the TV Show- "How They Do It"

**Annin is the company that we purchase our American Flags from.

They are all made in the USA.**

Carol Klee and husband Warren Carter show a feather flag, one of the newest styles on display and for sale at their store for the 4th of July. Photo by Rhonda S. Sanders

FLINT TWP. — People who want a made in the-USA American flag look no further than Klee’s flag store on Bristol Road to find one.

Rod Cullen, who was born and raised in Davison, has a tradition of buying a new one ever year to display on the Fourth of July at his home in the Upper Peninsula where he now lives, said his daughter-in-law who stopped by Klee’s to pick up his purchase last week.

Normally the store mails it to him but this year his son and daughter-in-law-are going to visit for the holiday and will hand deliver it, said Warren Carter, who owns and operates the flag store with his wife Carol Klee. Her parents Herman and Barbara Klee started the business in 1966.

Memorial Day in May, Flag Day in June through Independence Day in July is the money-making season for Klees, Flag buyers, many of them repeat customers, come in to buy for grave sites, home displays, parades and other occasions.

In the past, Carol has custom-made municipal flags for Burton and Grand Blanc city and township, she said.

Klee’s used to make American flags but now purchases them from an Ohio company to keep up with demand which accelerated after 9-11, Carol Klee said. But her affiliate business, Carol’s Custom Flags, makes flags of every hue and stripe from school mascots to company logos, special anniversaries to organization’s insignia. She even makes yellow ribbons for tying around mailboxes or old oak trees to show support for the troops.

Last year, she and her husband worked until 3 in the morning three days in a row to get a special order ready for the Renaissance Festival.

From the ceiling down, Klee’s is crammed with every flag imaginable. They come in all shapes and sizes from the smallest lapel pin and refrigerator magnet to car flags, gold-fringed and tasseled institutional flags, windsocks, pennants, streamers and a new feather shape.

Business drops off after the Fourth of July so that’s when Klee and Carter take a vacation. It will pick back up during football season and remain steady until the end of the year, Carol said. But from New Year’s until mid-March the flag business is slow.

Klee and Carter who are in their late 50s have two adult daughters Karri and Lindsey who they hope eventually will carry on the family business of making and selling flags.